Behind the Scenes of the Zanav Collection: In Conversation With the Phantom Hands Creative Team 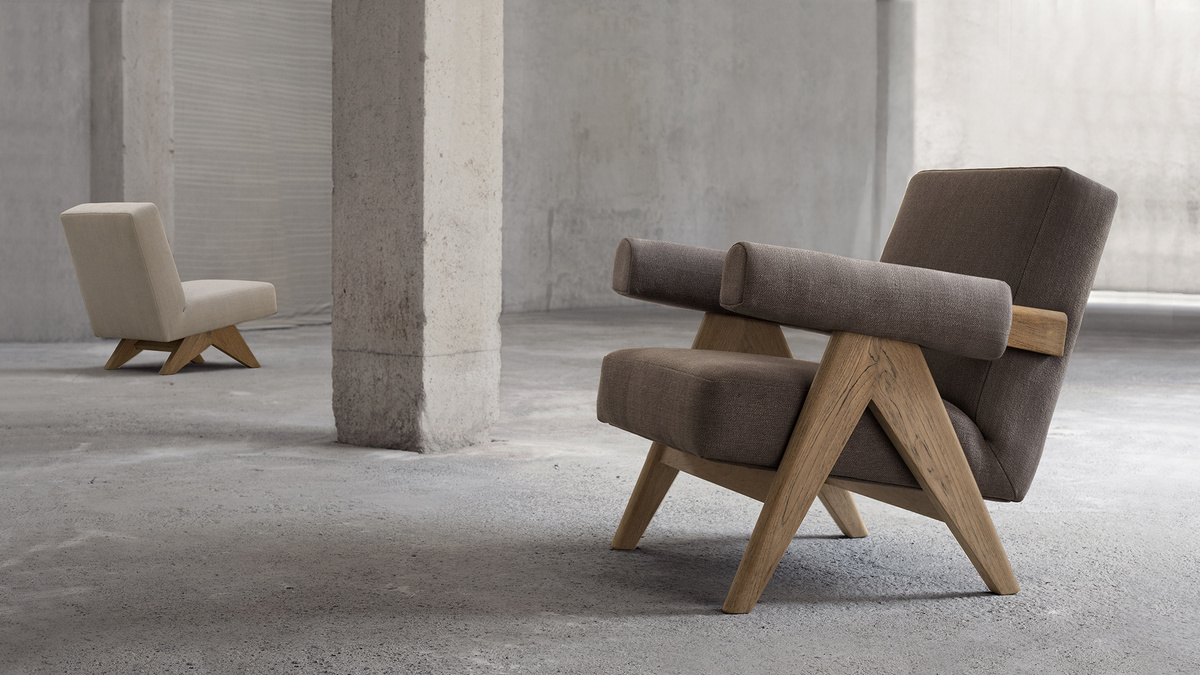 Phantom Hands’ new ‘Zanav Collection’ has been years in the making. It began in the early years of the company, following a meeting with Ravi Khemka, the founder of Zanav textiles.

Phantom Hands' values aligned quite organically with Zanav’s. Both strive to combine traditional Indian craft processes with contemporary design innovation. This shared goal played a significant role in facilitating an eventual collaboration years later. What facilitated it especially was Khemka’s inspiring notion of what handmade Indian fabric can be and how it can lend itself so well to furniture.

A chat with the Phantom Hands creative team about the process behind the making of the Zanav Collection. 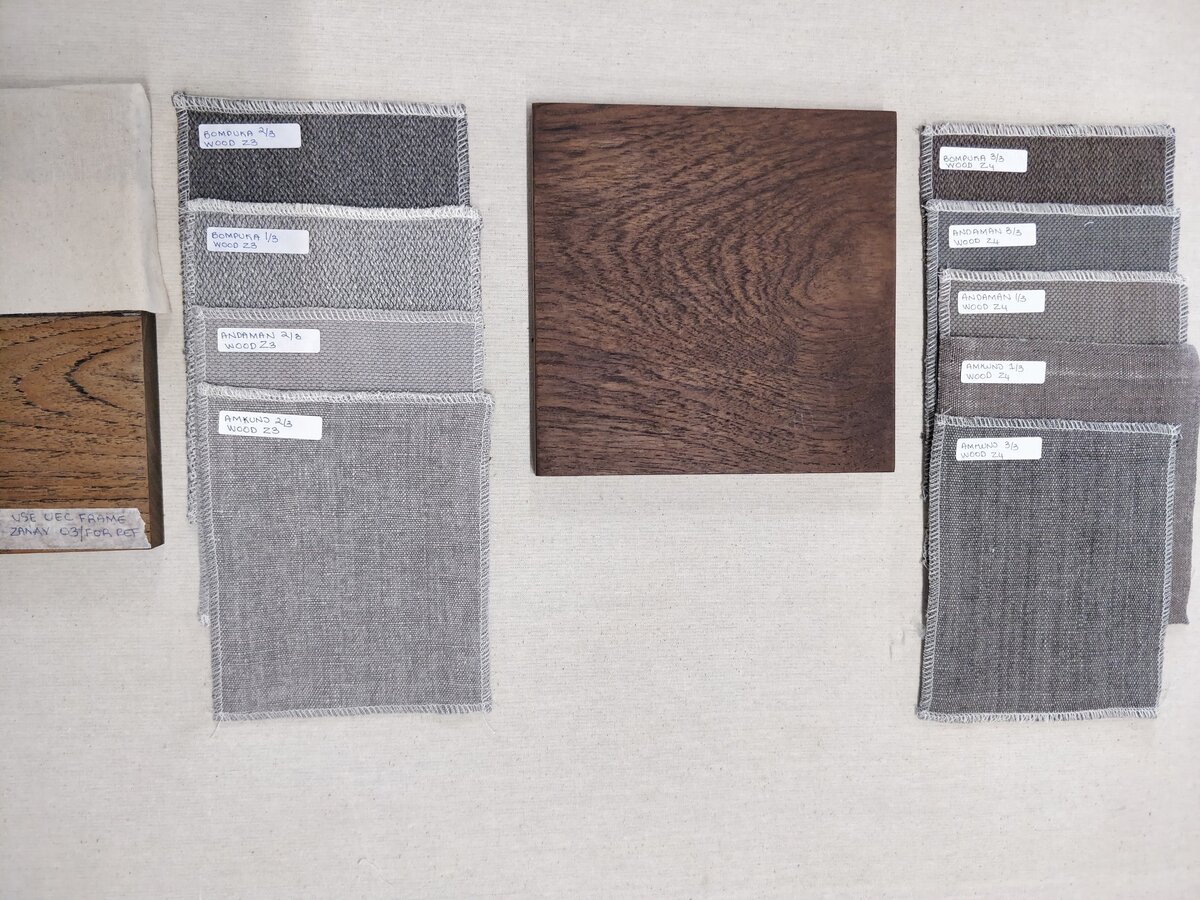 Parni Ray (PR): How did you learn of Zanav textiles?

Deepak Srinath (DS): We met Ravi Khemka, Zanav’s founder, a few years ago through a mutual friend, Sanchita Dasgupta. Sanchita is a renowned textile designer and researcher who began her journey at the National Institute of Design, Ahmedabad. She helped us identify handmade Indian fabrics that could be used for making seat cushions for Phantom Hands cane chairs. It was while she was working with us that she introduced us to the Zanav studio.

PR: Do you remember that first visit?

DS: Vividly! As soon as we arrived at Zanav, we were absorbed by an insatiable sense of order and clarity. The city and work anxiety just faded away and gave way to a feeling of privilege to encounter a vast, precious place. There is a sense of a mysterious, magical endeavour being in progress at the Zanav studio. We felt it then, and every time since.

During our first time there, I thought we were meeting Ravi to see some ‘fabric’. What we encountered instead was an infinite yet lone endeavour to realise a vision of what fabric (or even one’s life’s work) can be. As we got to know Ravi, we realised that his was no common, commercial enterprise and that Zanav is much more of a spiritual undertaking, a process of self-actualisation.

Ravi was very generous with his time, extremely articulate about his work process, and provided several fabric samples to help us grasp what he had set out to do. We knew very little about textiles or upholstery when we met him. But that first encounter with Zanav textiles was such a powerful catalyst that we became determined to delve into upholstered furniture, even though we were only looking at just cushions initially. 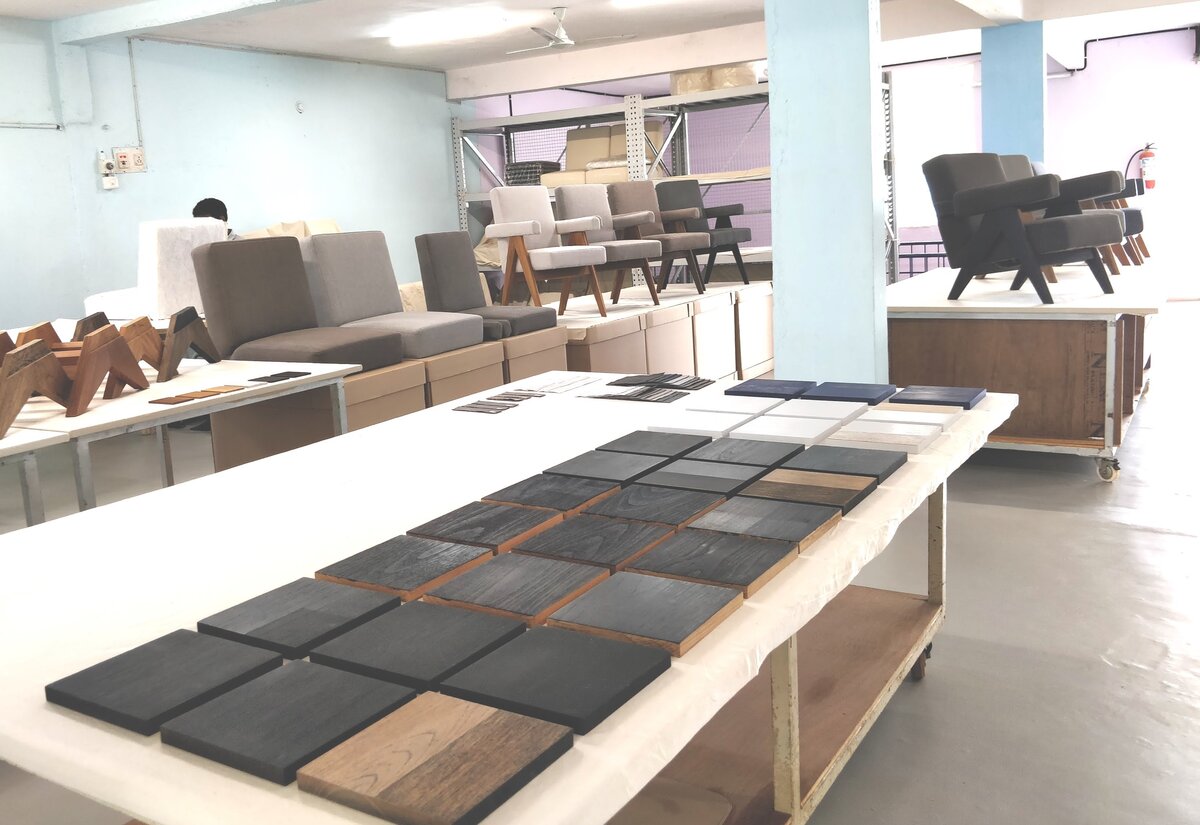 Image caption: Several experimental wood finishes were developed using hand staining techniques by the R&D team at Phantom Hands to find the right shade of wood for the Zanav upholstery fabrics. Wood samples are laid out for fabric matching trials in this image.

PR: Did you decide to collaborate with Zanav immediately?

DS: Not immediately. Phantom Hands was still in its infancy when we first met Ravi. But Zanav stayed in our minds after that first meeting even as years passed by. In the meantime, Phantom Hands grew, and quite organically, adopted the same ethos as Zanav.

Like them, we were also looking to combine authentic traditional processes with contemporary artistic skills and innovation. This shared goal appealed to us when we eventually thought of a collaboration. It was also convenient that Zanav was right here in Bangalore, where we are based. But I think what led to the collaboration finally was the power of Ravi’s single mindedness.

That single mindedness was everywhere in his enterprise — in Zanav's handling of material, the archiving of hand-mixed colours, the commitment to laboriously developing and documenting each nuance of the textile-making process. There was no evidence of the easy temptation to cut through the chase to reach the gem that was clearly within sight in all these undertakings, just the anticipation of something better. And then there is the fabric, each square inch of it reflects decades of effort and a complex diversity of colour.

What keeps us going at Phantom Hands really is our ambition to work with people who can provoke us, help us evolve and get to a better, higher place. In this regard, a collaboration with Zanav and Ravi was a no-brainer. 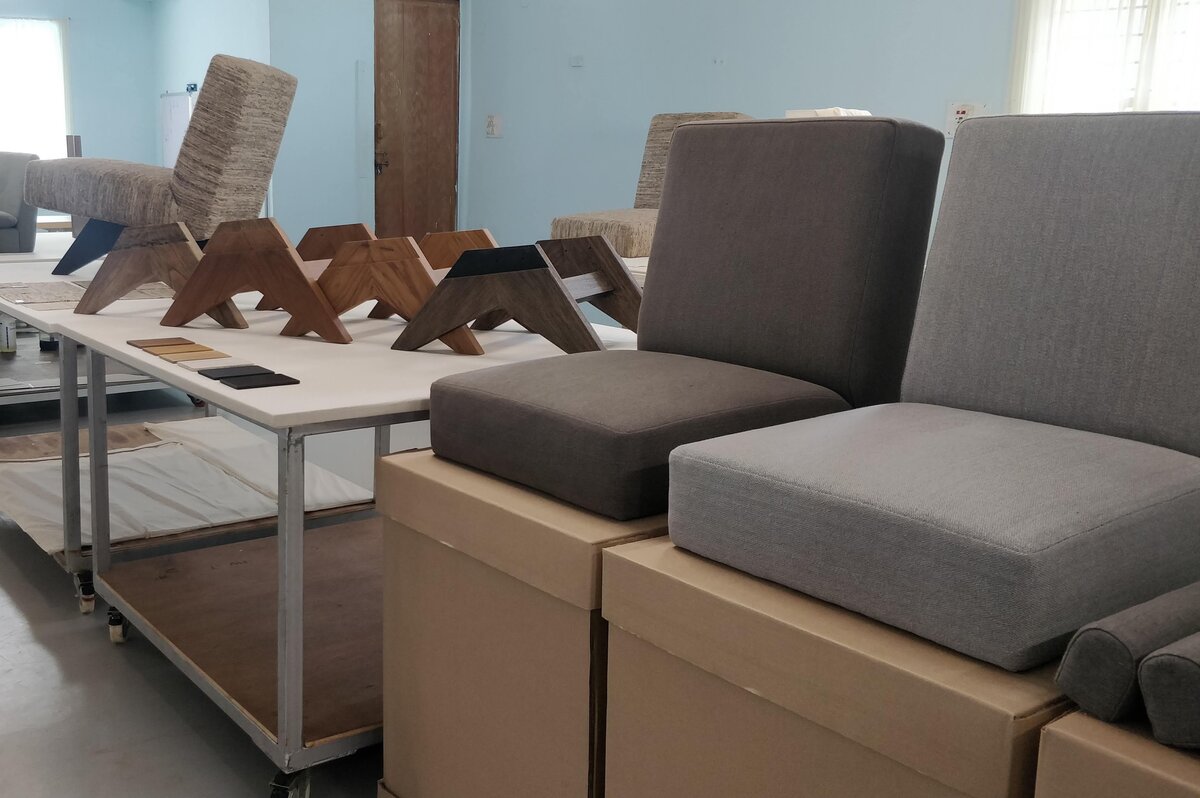 PR: The Zanav collection took its time to develop. Where did you start and what would you say was the idea behind it?

DS: It is an obvious one and completely directed by Ravi, who has a very well developed idea of what colours, texture, typologies of fabric and wood go together.

Kainaz Unvalla (KU): Yes, It was a lot of fun to try and capture his specific aesthetic (which relies on cool, grey tones) and pair it with teak, which is associated with a striking orange, warm brown colour and does not always pair well with neutral tones. So we experimented quite a bit with bringing colour into the wood.

DS: This was the first time we were trying this at Phantom Hands...

KU: But we had to do it in a way that would not belie teak's native qualities. So we decided to work with the distinct texture of the wood, often the flame pattern, and highlight that while allowing a foreign colour to override that of teak. We had to be very careful in towing the fine line between disguise and accent. Finally, our experiments gave birth to our R&D investment in the colour and finish of teak, which we will now take forward with our other collections. 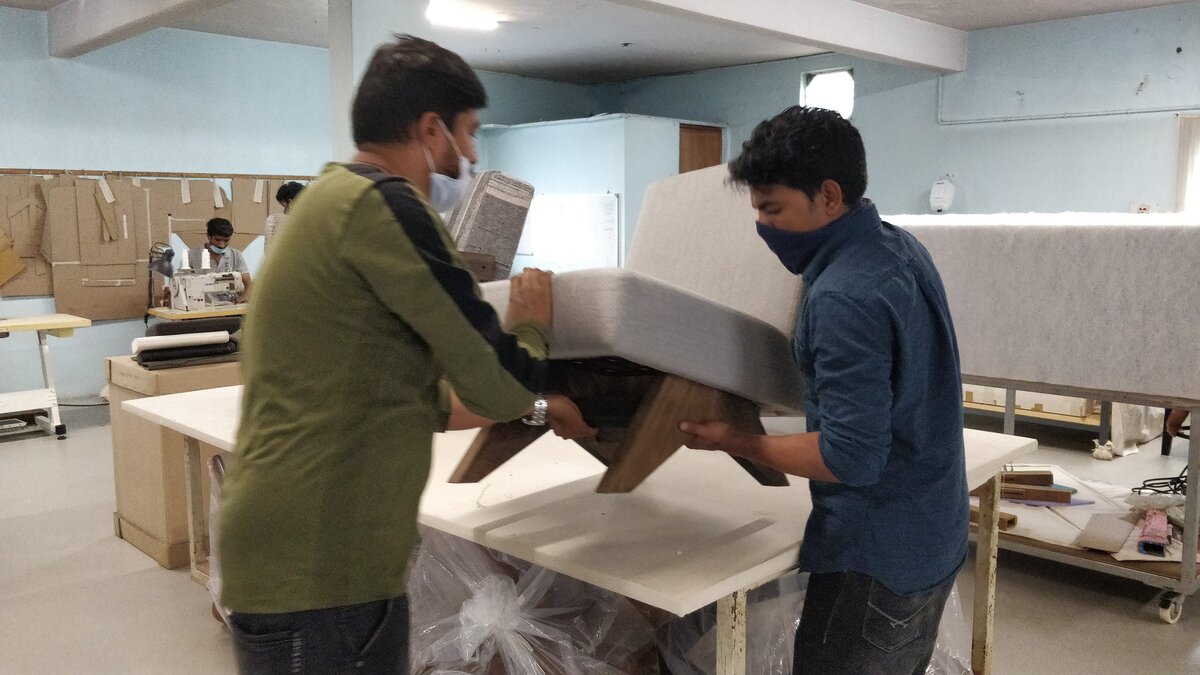 Image caption: A prototype of the Upholstered Armless Chair being assembled.

DS: The key idea for this collection was to bring native material and skill distilled over generations to a highly contemporary design. Natural fibre has been used in mass produced furniture very reluctantly. This is mainly because it is often not as robust as its synthetic counterparts and tends to lose its tensile strength over time. We tried to address such worries via the fabric for the Zanav collection, and I think we have raised the bar substantially.

PR: How would you describe the process that led to the collection?

KU: I think the process was exemplary. Like Deepak mentioned, it took a lot of time, but there was also no hurry from either side. Ravi provided considerable support — from feedback on the length of the stitch line to matching thread specifications and experimenting with backing on the fabric that would make it more robust; he was a treasure trove of ideas!

On our part, I believe we left no stone unturned in attempting to realise the qualities that would validate a collaboration with Zanav. We had a few sessions of laying out all the fabrics, several versions of upholstered seats, wood samples, and variations, which in itself was a thrilling process and exchange.

We were almost always in sync with the matters of pace, our attitude towards commercialising the collaboration, our idea of success, and the expectation of the time it takes to establish something new. All this was helpful in making the process smooth. 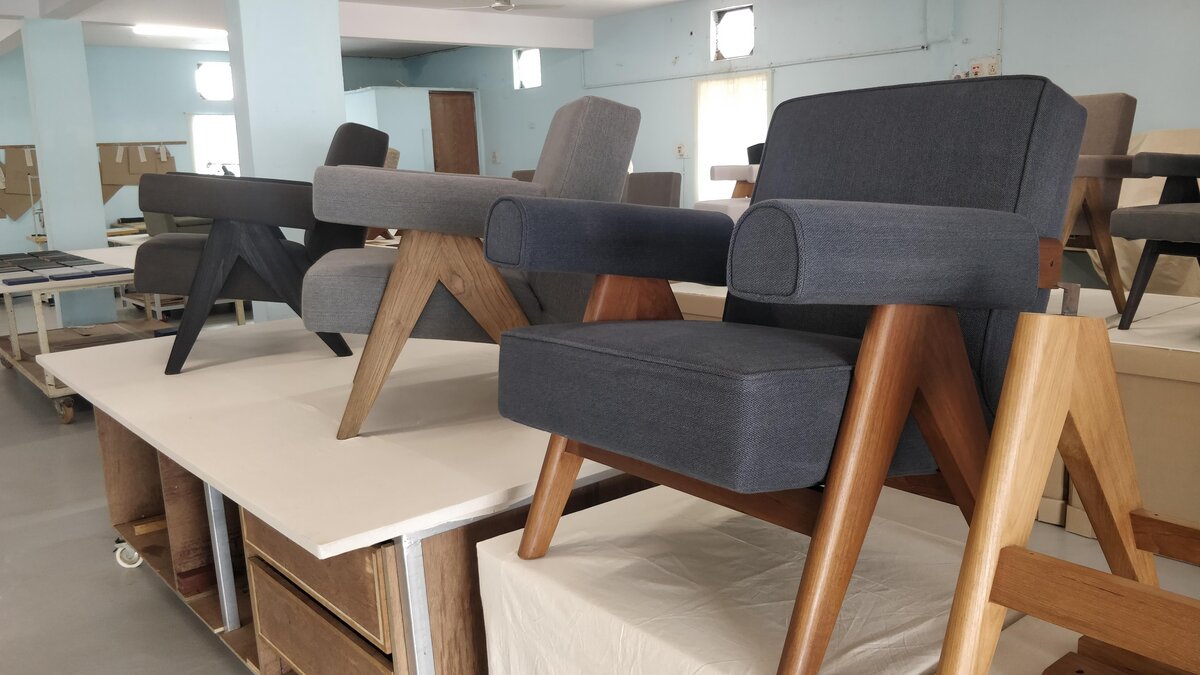 PR : Kainaz, you came on board specifically to help prototype the chairs for the Zanav collection.

PR: What were the fabrics you worked with like?

KU: Zanav sent us many types of fabric to experiment with on the three chairs that Phantom Hands was offering in 2020. Of these, we chose to work with two, a light linen fabric and a cotton one that was slightly thicker. Our aim was to figure out a way to upholster the chairs in the snuggest way. The existing upholsterers at Phantom Hands, of course, had their own way of doing this, but they had been working with industrial quality velvet, which was unlike what we now had in our hands. We had a very different set of problems to deal with.

PR: What kind of problems?

KU: For instance, the velvet upholstery fabric came fused and ready to be fitted onto batted chairs, but Zanav’s fabric didn’t. It was after working with it for a while that we realised we couldn’t get things done unless we got the fabric fused because the fusing lends the fabric the sort of stability we were looking for. It also allows for the fabric to last much longer.

Then, unlike the velvet fabric, the warp and weft of the linen fabric was visible, which meant that it had to be fitted in a manner that wouldn't make it look uneven. This sounds easy, but wasn’t (laughs), especially since fitting the fabric snuggly meant stretching it tightly across the chair parts.

Once that problem was solved we found that the glue that we were using was leaving little bumps on the fabric, so we had to change it. The process involved a lot of fundamental R&D which you don’t have to do when dealing with industrially-produced fabric. 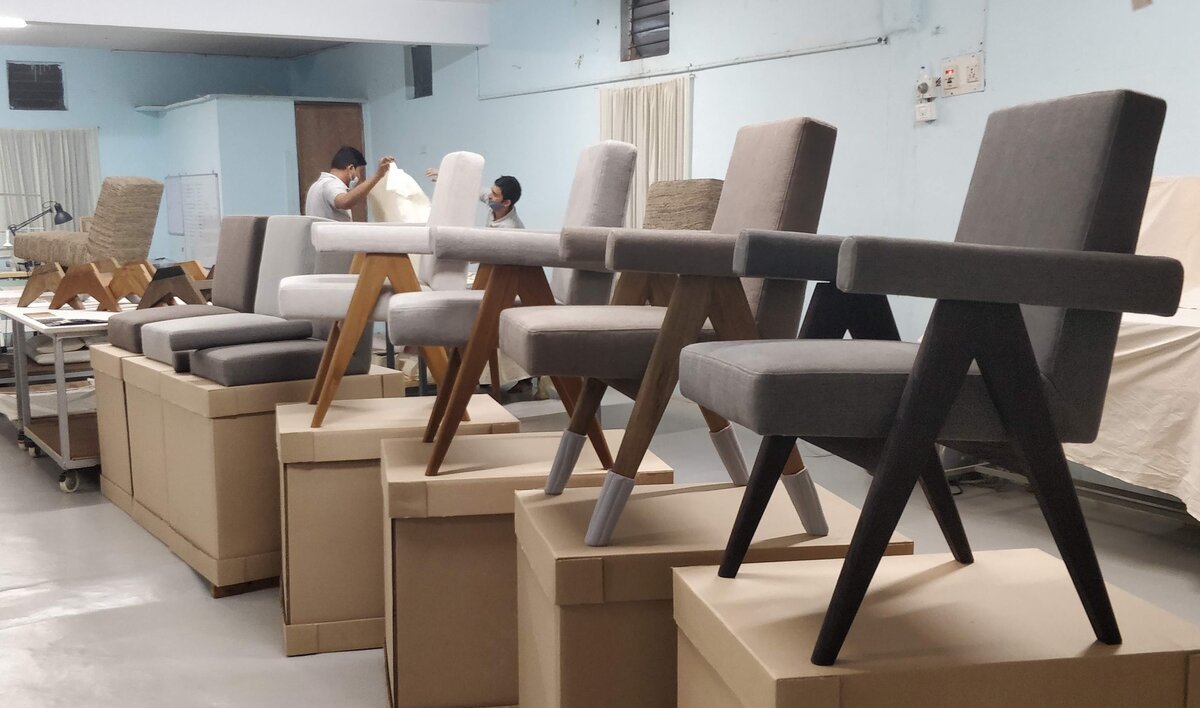 PR: Would you say that the Zanav collection is different from all other collections at Phantom Hands?

KU: At the cost of sounding clichéd, yes, I would say so. The upholstered furniture that Phantom Hands has offered so far was based on customer demands or current trends. The fabrics used were mass produced velvets and woollens with contract quality rub counts and durability. These are meant for high-traffic locations catering to market segments such as hotels and hospitality.

With the Zanav collection, we are presenting an alternative idea of what is good and desirable in upholstery, a far more nuanced definition of luxury.

DS: In the course of building this collection we discovered that much like us, there are consumers who appreciate fabric created with care, who recognise the beauty of natural fibres and the frays that develop over time adds to a well created textile’s heritage and value.

The Zanav collection is meant for such buyers, who will see the chairs offered under its banner as less a piece of furniture and more as a beacon of human endeavour that is rare in our world today. 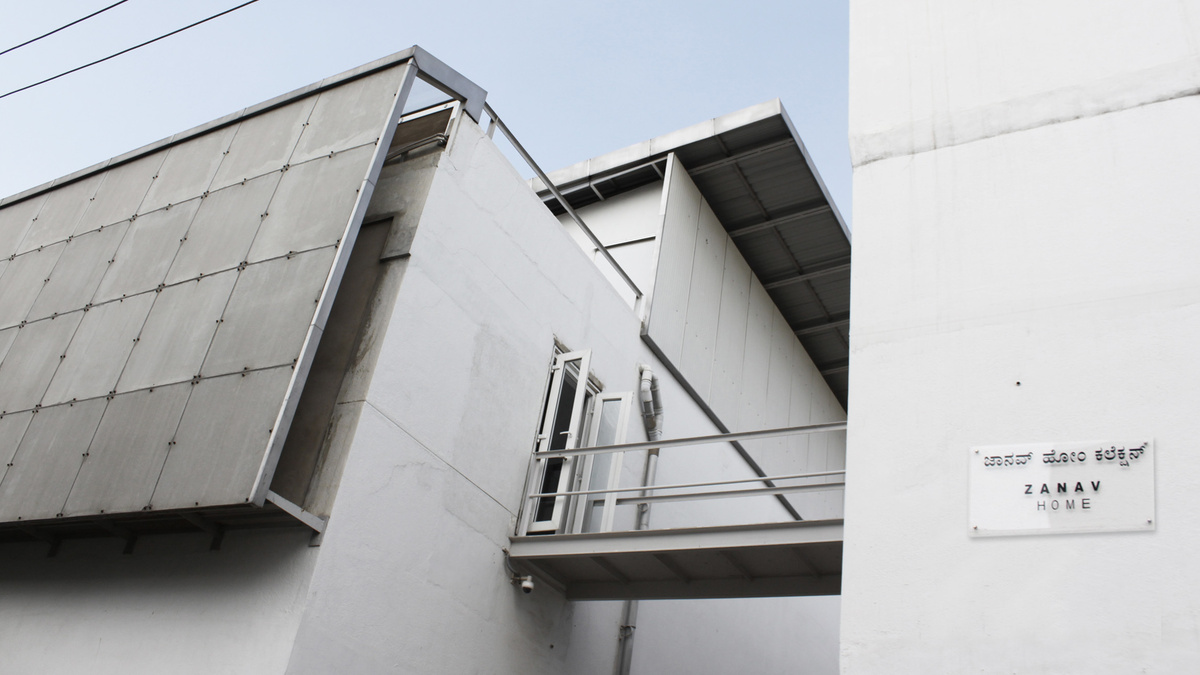 In Conversation With Textile Maker Ravi Khemka: In Search of the Infinite Elegance of Grey

Ravi Khemka established Zanav Home in the early '90s and supplied fabrics to leading international furnishing brands until 2015. Since then he has been chasing after a single colour - grey. Read his intriguing story.